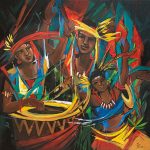 Dmitry Dementev was born on June 8, 1960 in Sevastopol (Russian Federation). From 1978 till 1999 was a Marine officer at Black Sea Fleet. Since 1999 he has been living and painting in Sevastopol. Participated in more than 60 exhibitions, including 9 of them personal. [read more] Dmitry Dementev was a curator of the “Crimean Nude Art” Exhibition and the Artistic part of “Wines Art Festival” in Russian Federation. Arts are in private collections and in collections of the Sevastopol State Art Museum named after Kroshitsky,  Simferopol State Art Museum and  Kamianets-Podilsk State Art Museum. In 2013, painted series of Romanov Imperial family portraits and was awarded by Russian Imperial House of the Romanov Dynasty medal for the contribution to the preservation of historical and cultural heritage, Art Exhibition Hall “Art Donbass”. Solo exhibitions: Selected group exhibitions: