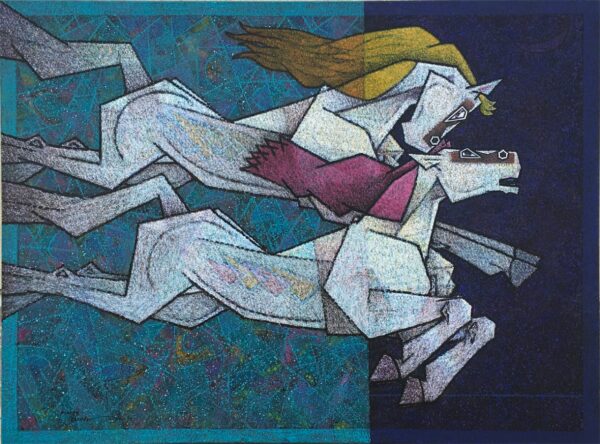 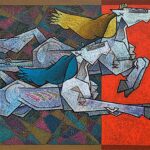 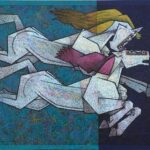 Dinkar Jadhav was born in 1973, Jadhavadi, Pune, India. He was a very hard working student in Kala Vishwa Mahavidyalaya at Sangli and Abhinava Kala Vidyalaya, Pune. At a young age he was inspired by J.M.W Turner following which he began to work in Impasto – a thickly textured paint that imparts a quality of ‘movement’ to the art.Read More

Dinkar Jadhav has also been fascinated with the play of light on nature, though he has never attempted to create the same colors on canvas. He breaks the colors into blocks on the canvas, never trying a uniform colored canvas. Over the years Dinkar has evolved a lot as an artist the result of which can be seen in his paintings. Jadhav uses art to communicate his inner anguish and his adept brush strokes ignite fiery strength on the canvas. Take his 2017 series “Anguish to Ecstasy” which throws the viewer into a romance between elements of Nature, the sun, and the moon and horses. Dinkar Jadhav Paintings have been a part of more than 100 exhibitions and group shows around India. Corporate and individuals across the world are collectors of his work. Dinkar has actively participated in charity auctions.

Working mainly in impasto, which involves layering of paint, Jadhav’s constant source of inspiration is the natural world. He frequently paints horses and bulls, displaying a wild energy. Artist Dinkar Jadhav is well-known for his Ashwa Chitramala (the Horse series) paintings. He uses bold and colourful palettes to paint his horses. The energy and positive spirit of a horse can be felt through his work. They symbolize the passion of love, struggle for living and spirit of freedom. He also uses images of the Sun and the Moon in his work which illuminates the space with the basic emotions and feelings of eternal romance.

The colours are bright and gleaming with self-assurance, the brush strokes are gentle yet confident and echoing the spirit of ‘carpe diem’ i.e. seize the day! His horses symbolize the undaunted quest of human-beings for the greatest of the feelings called love.