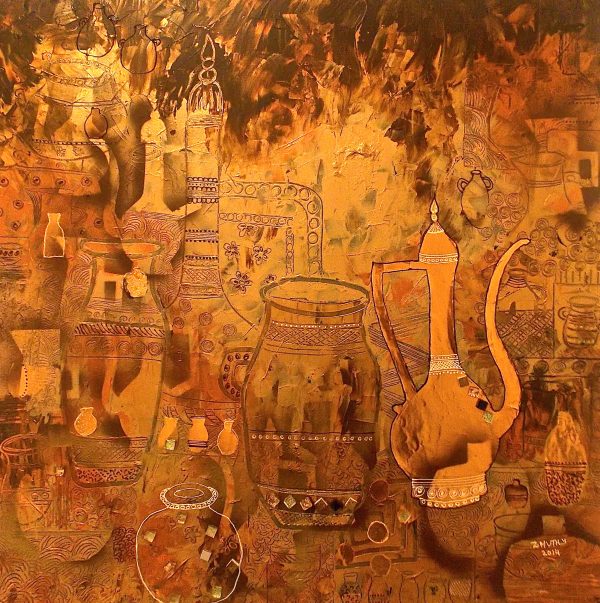 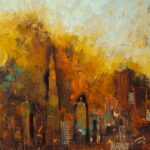 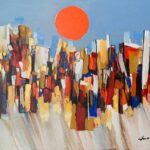 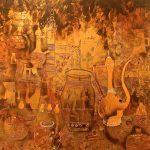 Zaahirah is a passionate artist who is from Mauritius. She entered the artistic arena at a young age, riding swiftly on the crest of the waves formed by her passion and imagination.[read more] Firmly perched on a flying carpet that roams from the azure coasts of her motherland, Mauritius, to the silky sand dunes of the Persian Gulf where she currently resides, Zaahirah, an Artist Activist, perpetually attempts to re-define and re-discover herself on the landscape of her canvases.Her work echoes the stories of the ebullient ocean and the elusiveness of the desert, all amalgamated through the creative osmosis that time and continuous experimentation achieve. Moving from acrylic paint to the use of mixed mediums – many of which she crafts herself on a spur of inspiration – Zaahirah has transcended the limitations defined by the tip of her brush and, in ecstasy, she almost literally pirouettes on her artwork, using her body to put color in thoughts and contour in emotions. Her fingertips leave gaudy traces, the soles of her feet dabble in paint forming paths, her very breath remains indelible in shapes and themes. Layer after layer, three-dimensional illusions are spawn into life, turning a simple frame into an experience, intervention, or statement. It is this vividness, the serenity of the frequently repeated patterns, the ode to the subtle hues of a monochromic adventure, the peaceful revolution, the attention to the metaphorical, and the buoyant disposition emanating from her work that have resonated with hundreds of people. Over the years, this led to a series of prestigious awards and official recognitions. To name just a few, Zaahirah has been nominated as the curator for World Art Dubai 2017, and has been honored as the “Artist of the Year 2016” at the Ras Al Khaimah Fine Arts Festival; she has received the “Youth Excellence Award in Leadership” and the “Oscar de la Jeunesse 2001” in Artistic Pursuit by the Government of Mauritius, while she was also the winner of the 2013 Artists Critic Award in Dubai. Her work has been featured in the 101 Artists Toastmasters Around the World book and the 2015 Sikka Art Fair in Dubai. Finally, she has exhibited either solo or collectively in Africa, Europe, and the Middle East. Her presence in each exhibition is always characterized by an inspiring message she chooses to highlight in her work.Through this, she aims at initiating a dialogue with the viewers, urging them to move out of their comfort zone to reflect, reconnect with the inner self and with others, or celebrate on the hope manifested in the beauty of human creations.[/read]